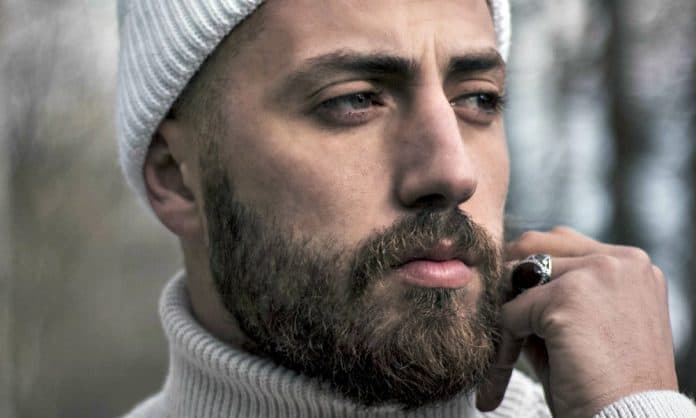 The short boxed beard is a type of full beard that has been carefully groomed with sharp lines and contours so that it resembles a “box” around your jawline. It’s typically trimmed evenly to ½ inch length.

This type of facial hair is a great choice for any man who wants to grow a full face beard, but doesn’t like the volume and ruggedness of a classic full beard.

Short boxed beard is one of the hottest beard styles a man can grow and at the same time quite a formal one (so formal in fact that some call it “the corporate beard“), which means that it’s an accepted beard style for both in and out of the office.

What is a Boxed Beard 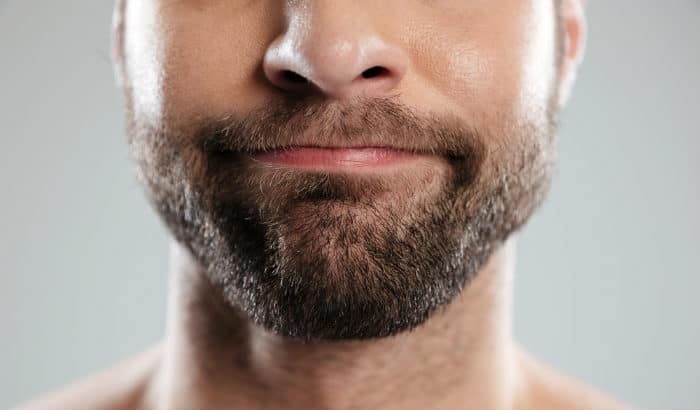 Boxed beards are full face beard styles with sharp well-groomed lines and edges, which sometimes make them resemble a box or frame around your jawline.

In a proper boxed beard style the cheek line should either be a straight line or have an angular step-cut, and the neckline of the beard is typically trimmed closer to the natural edge of the jawline compared to most other beard styles (which normally have the neckline close to the Adam’s apple).

What is also characteristic to the boxed beard is that the whole beard is trimmed down to an even length thorough the face, contributing to the clean and sharp look of which the style is known for. 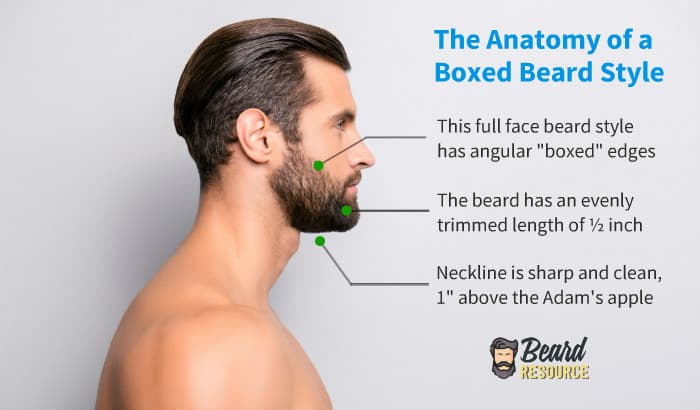 There are three main types of boxed beard styles:

The short boxed beard is the one that people almost always mean when they talk about boxed beards, and that’s why we will be focusing primarily on the short variation of the three box beards for the remainder of the article. 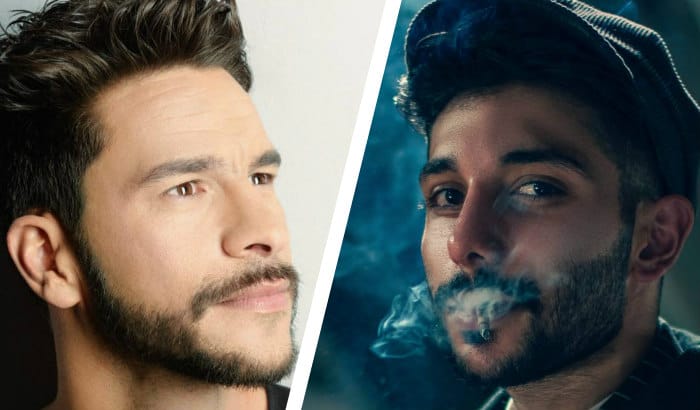 Low-box: which as the name implies, has the cheek line trimmed lower than where it naturally grows at, so much so that it almost resembles a thick chinstrap. This is a good option for guys who have weaker growth at the upper cheeks.

High-box: has the cheek line as high as it naturally grows at. In most cases, the high-box variation is the better looking one, but it should only be grown if the upper cheeks have enough thickness and density.

How to Trim a Short Boxed Beard 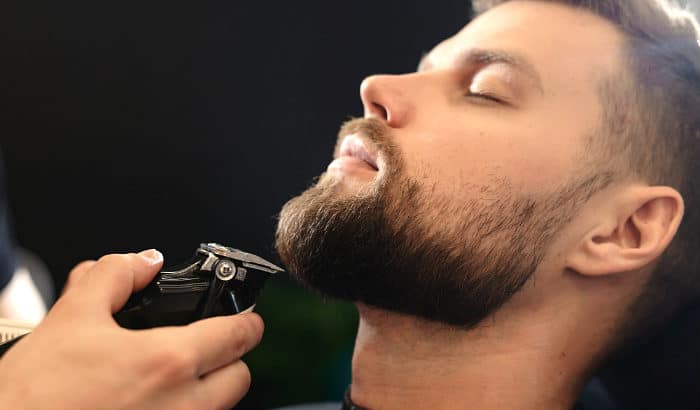 Like most beard styles, it takes time to learn how to properly trim a short boxed beard, and for your first few times, you will most likely not get the desired results.

That’s OK though, with some practice you too can become a master at grooming the boxed beard – and if not, you can always go to a professional barber to have it trimmed for you.

The tools you will need include:

Here’s how to trim a short boxed beard:

Quick tip: The short boxed beard calls for very sharp and neat edges. These can be difficult to shape out by yourself, which is why I recommend that you get a beard shaping tool to help with trimming the cheeks and the neckline.

How Long Does it Take to Grow a Boxed Beard 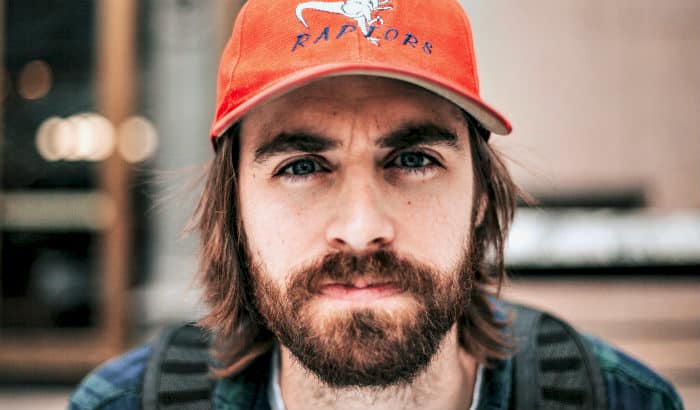 The short boxed beard has a length of ½ inch (1.25 cm) and it will take approximately one month to grow out (if we go by the average facial hair growth rate of half-an-inch per month).

Obviously it will take longer than that to grow out the other boxed beards, the medium and the long one.

But in all honesty, nobody really cares about the medium or long boxed beards, everyone just wants to know how long it takes to grow the short boxed beard and that is approximately a months worth of facial hair for an average fellow. 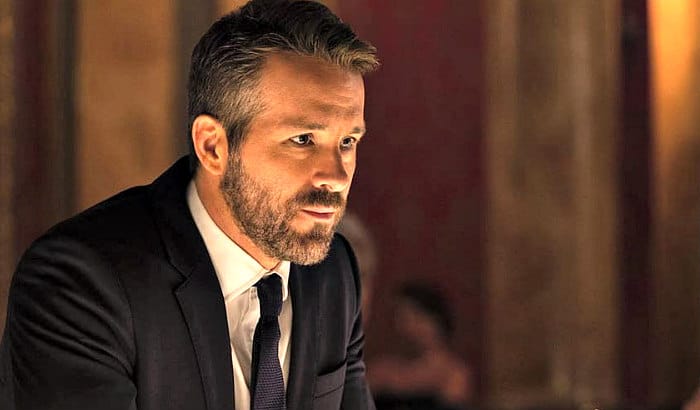 With the sharp and clean look provided by the short boxed beard, you could easily think that many famous men would be fond of the style, and you would be 100% correct.

How to Style and Maintain a Boxed Beard 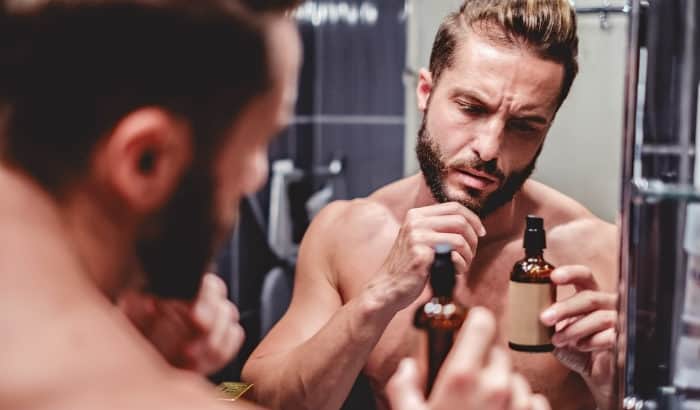 You need two things to style a short boxed beard so that it keeps its shape and lays flat against your cheeks and jaw – and those are a tin of strong beard wax and a beard brush suitable for short beards.

Here’s how to style the short boxed beard:

NOTE: You don’t necessarily even need to style the short boxed beard at all, if you have a thick beard that doesn’t have a tendency to curl at shorter lengths. But if you do, then the beard wax and a boar bristle brush are your best friends.

When it comes to maintaining a short boxed beard, you will want to trim it back down to the ½ inch length with a beard trimmer on a bi-weekly basis (or by the very least monthly if you’re lazy) and while doing that, also clean up the cheekline and the neckline with a razor or shavette.

You can also use beard oil to moisturize the beard and give it a bit of shine, but this is optional since a short beard like this will still retain enough moisture and nourishment from the natural sebum oil produced by the sebaceous glands (it’s only longer beards that typically “need” beard oils).

What Face Shapes are Best for The Boxed Beards 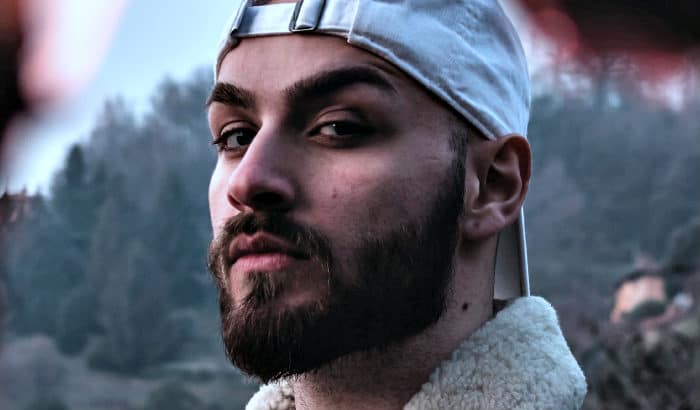 When choosing a beard style, make sure that it matches with your face shape. This is hugely important and an often over-looked thing that can make or break your looks.

Luckily, the short boxed beard bodes well with practically any face shape, as it’s considered to be an universally safe beard style.

Since it doesn’t add too much length at the bottom, the short boxed beard is among the best beard styles for an oblong face, it also works exceptionally well to accentuate the strong features of a diamond face shape.

For round, heart, and triangle shaped faces, the short boxed beard is a good style, but not the best one, as those face shapes will benefit more from added length and width at the bottom of your chin and jaw.

The two remaining face shapes; square and oval, are considered “ideal face shapes” for men and you shouldn’t grow a big beard to try and hide their natural shape. That’s why the stubble beards (light stubble, medium stubble, heavy stubble) and short beard styles (like the boxed beard) are good choices.

Bottom line: The short boxed beard is a suitable fit for any face shape, but it’s at its best when matched with an oblong or diamond face.

Universally viewed as an attractive and formal beard style; the short boxed beard has something for everyone.

This half-an-inch long full face beard features sharp angular lines and well-maintained mustache, along with a neckline that closely follows the natural contours of your jawline.

Due to its short length it will only take you a month to grow enough facial hair so that it can be shaped into a short boxed beard.