The heart face shape is the least common one of all the seven main shapes. It’s also the hardest to determine if you have one, since it shares so many similarities with the triangle and round face shapes.

When choosing the best beard style for your face shape, men with heart shaped faces will want to look for styles that help accentuate the jawline and add some width to the soft pointy chin.

In other words, the goal should be to add some squareness to the bottom part of your face without adding too much width to the cheekbones.

This is why the bottom-heavy beard styles work very well on a heart face shape, such as the Garibaldi, Verdi, and the Hollywoodian. 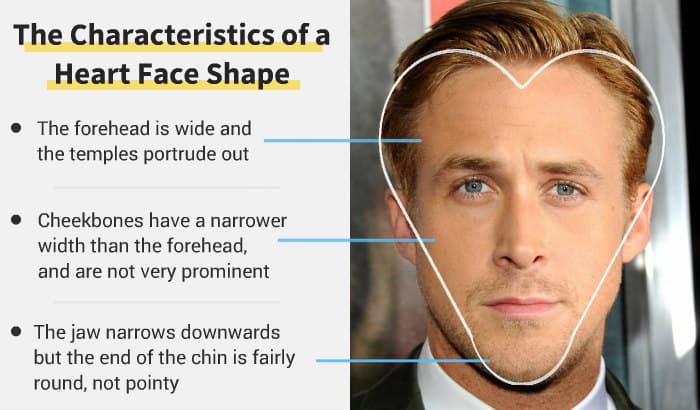 A heart shaped face is like a combination of triangle and round faces.

The shape itself is very close to an inverted triangle (wide forehead narrowing down to cheeks and narrowing even further down to the jaw and chin), but the features are roundish and softer, hence the heart shape instead of triangle.

The biggest cue of a heart shaped face is the wide and big forehead, with rounding and slightly protruding temples.

Then comes the cheekbones, which have a slightly narrower width than the forehead and rounded edges as well.

And lastly the narrowest point of the face which is the jaw that meets up with the narrowing chin that is not pointy, nor slanted, but evenly rounded at the bottom.

Some popular men with the heart shaped face include:

How to Know if You Have a Heart Shaped Face 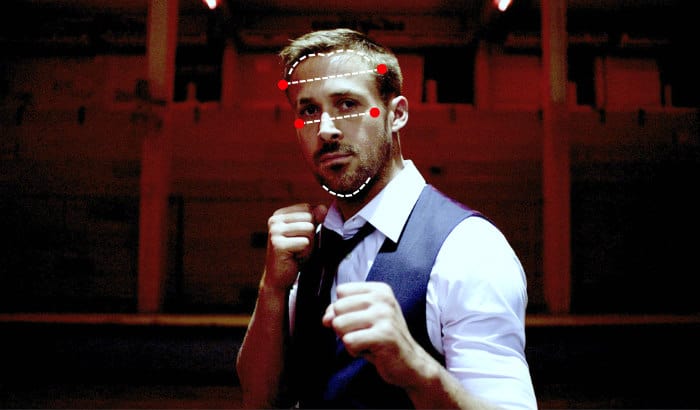 There are seven main face shapes, and knowing exactly which one of them you have, is almost impossible without measuring it yourself.

This is especially true for a face shape like the heart, which is the hardest one to determine and the one with closest resemblance to some of the other shapes.

You can still do it though, you only need a roll of measuring tape and some knowledge of what you’re doing…

Here are the four measurements you need to take:

Here’s a picture that shows exactly where these measurements are taken from: 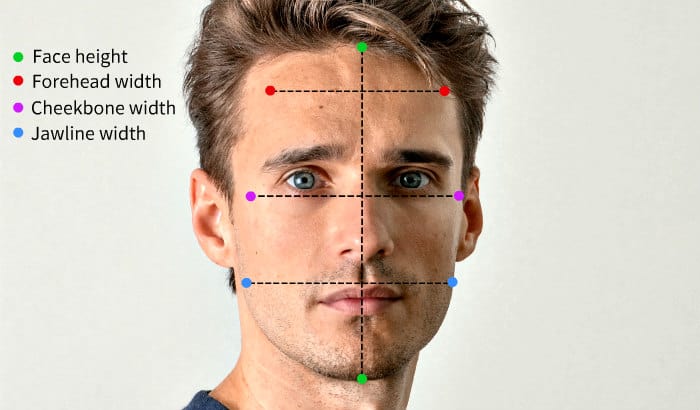 You have a heart shaped face if:

What Kind of Beard Compliments the Heart Shaped Face 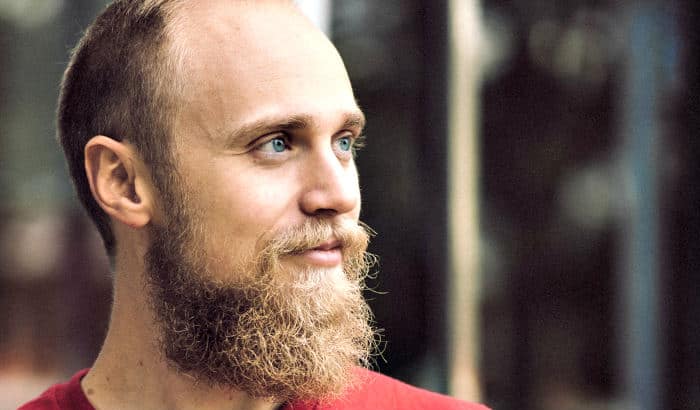 Since the heart shaped face will gradually get narrower and narrower from top to bottom, the beard styles that suit it well are those that add some definition and width to the narrow jawline, and help angle out or distinguish the chin.

You also want to keep the beard quite short on the sideburns, as you want to avoid adding too much width to the cheekbones which would then overpower the jaw.

If your beard does already have some width at the bottom (a style like Garibaldi for example) then you might let your sideburns grow out slightly to help balance out the wide forehead.

In other words: a heart shaped face will want a beard that adds some volume to the jaw and chin, balancing out the narrowing jawline and small chin.

What Kind of Beard Poorly Fits the Heart Face Shape 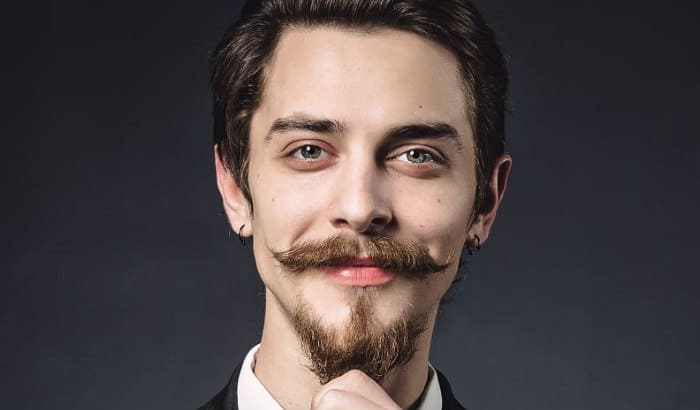 The beard styles that do not suit a heart faced shape that well are those which have pointy chins and add too much length or emphasis solely on the chin part (but not on the jawline itself).

Think of styles like goatee, or the Van Dyke (seen above) for example. They are only going to exaggerate your already heart shaped face further, which makes your jawline look even narrower and your forehead even wider.

Choosing a bad beard style for heart shaped face will make the top part of your head look like a giant balloon or bubblehead, so it’s best to grow out a style that adds definition to the bottom, or not grow one at all. 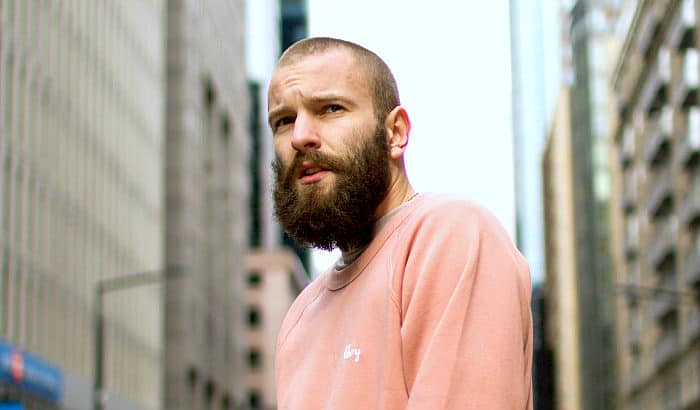 It gets the name from the late Italian General; Giuseppe Garibaldi, and features a wide rounded bottom part with short sides and full mustache.

Why it works so exceptionally well on a heart shaped face is because it helps boost up your jawline and make it roughly as wide as your forehead, nicely balancing out the proportions of your face.

The thing about the Garibaldi though, is that it takes a long while to grow out before you can start shaping it.

Since this beard style has a minimum length of four inches (and the facial hair grows at an average rate of ½ inch per month) it will take you roughly eight months to have enough beard hairs for a Garibaldi beard.

Want a picture perfect example of a Garibaldi done right on a heart shaped face?

Take a look at the MLB pitcher Jake Arrieta:

You wouldn’t believe how much narrower his chin actually is behind that beastly Garibaldi, so here’s him without it. Now do you see just how much your natural face shape can change with a right choice of beard style?

If you want to learn more about this type of beard, take a look at our full guide to the Garibaldi beard style. 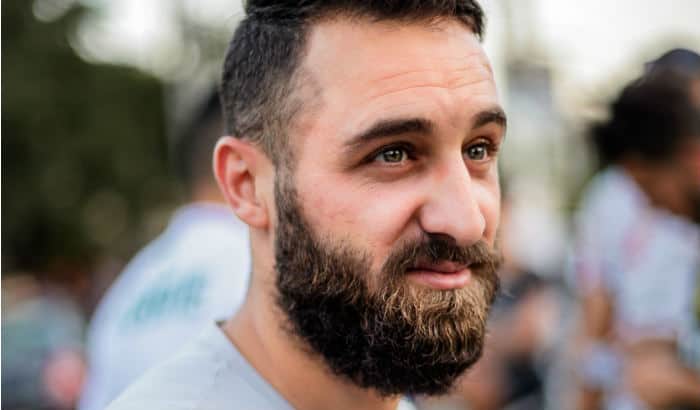 A full beard will also bury your small chin underneath, making it look like yours would actually be wider and more slanted – which for a heart shaped face – is a good thing as it makes things look more proportionate.

To read more about it, check out our full guide to the full face beard. 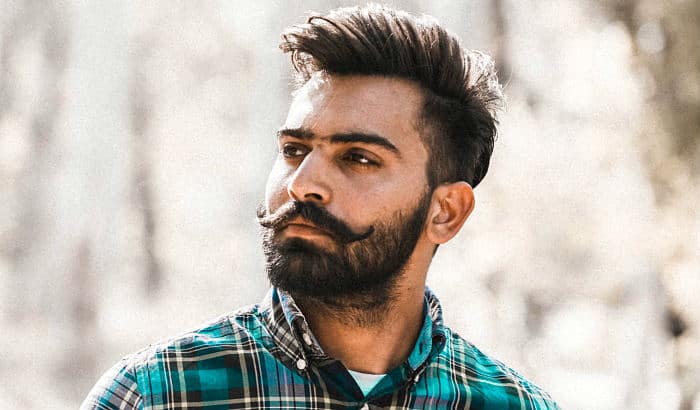 The Verdi is an elegant beard style with the focal point being a thick mustache that is typically either curled up or styled to the sides.

The rest of the face will be covered in a medium-length full face beard that has somewhat of a natural look.

It’s one of the best beard styles for heart face shape, as it takes attention away from the chin and jawline with the thick bold mustache, and then the full face beard will further add some volume and width to the bottom part of your face.

The Verdi also features short sides, which is great as we don’t need any extra width to the cheekbones, we want all the boost to be on the narrow jaw and chin.

This beard style takes about two to four months to grow, with the typical length being anything upwards from two inches. If you’re interested in learning more, we do have a full guide to the Verdi beard style. 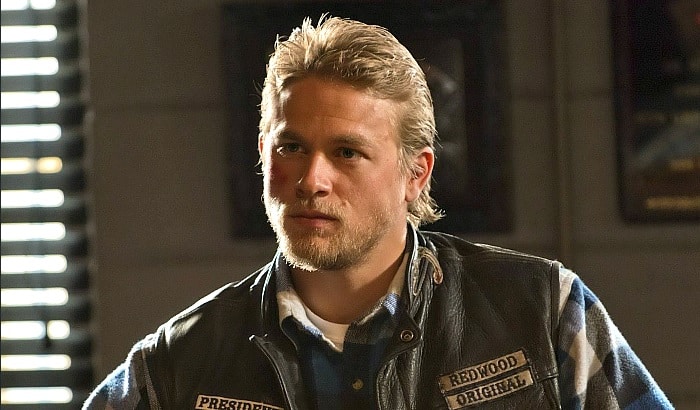 The Hollywoodian beard style features a full extended goatee that is left to grow roughly 1″ above the jawline all the way to the edge of the jaw under the ears (at the full width of the mandible).

The sideburns and upper cheeks are shaved, leaving this beard style to only add definition to the chin and jawline – which as you know by now – is exactly what a great beard style for heart shaped face should be doing.

The Hollywoodian can take attention away from your chin and nicely distinguish it, while it does not add any width to your cheekbones.

This helps to make your face more proportional, with the width of the forehead, jaw, and cheekbones being closer to each other.

To read more about this style, take a look at our full guide to the Hollywoodian beard style. 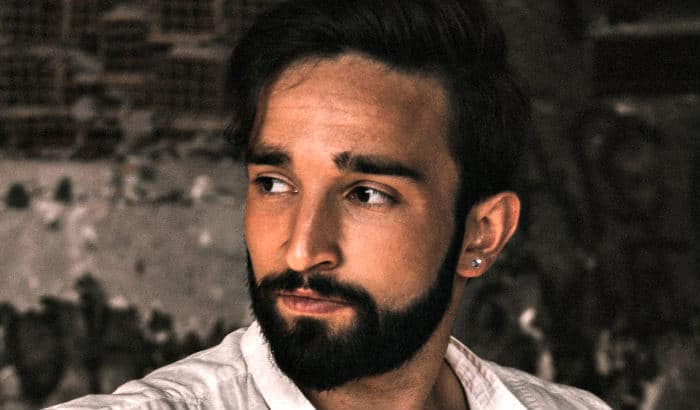 The short boxed beard is a full face beard style that is often also called “the corporate beard” due to its sharp, clean cheek and neckline, and evenly trimmed length at ~½ inch.

When it comes to a heart shaped face, the short boxed beard bodes very well with it, thanks to the extra definition and angular edges it adds around the jawline.

It also helps accentuate your chin so that it doesn’t look that small and narrow anymore.

There are two variations to this style:

Both of these suit the heart shaped face, but if your face height is on the lower side, then you might opt for the low-boxed version as it helps create the illusion of a taller face thanks to the extra skin it shows on the cheeks.

Heart shaped face narrows all the way down from the wide forehead, slightly less wide cheekbones, and into the narrow jawline and small chin.

When picking the right beard for heart face shape, the focus should be on adding volume and width to the narrowest part of your face, which happens to be the jawline and especially the chin.

And that’s why some great beard styles are the bottom-heavy ones, such as the Garibaldi, Verdi, and natural full beard.