Jake Gyllenhaal is often considered to be one of the most attractive men to walk on this planet, so does that mean his beard is the reason behind that?

But it should play a significant role, considering that he has been rocking the same style of facial hair during the times he has been crowned to be the Hollywood’s best-looking man in various publications.

Gyllenhaal undoubtedly has one of the best beards among all celebrities, and he can rock nearly any style of facial hair without it ever looking bad on him (we’ll provide some examples below).

And his acting capabilities aren’t half-bad either. From Donnie Darko to Zodiac, he has appeared in more than 35 movies so far.

The big question is: How to get Jake Gyllenhaal’s beard and what does it take to maintain it?

The beard style Jake Gyllenhaal most commonly wears is called the classic full beard, which features unmodifiable growth evenly distributed to all areas of the face.

For a more groomed look, Gyllenhaal sometimes opts for more well-kempt full face beard styles like the short boxed beard or even various lengths of stubble.

It’s crucial to understand that Jake Gyllenhaal has a very thick beard with a full beard’s underlip and a mustache that connects to the chin hairs.

This makes his beard look visually pleasing and well maintained, even if he would grow it out without any trimming whatsoever.

What length is the beard of Jake Gyllenhaal?

Like most celebrities, Gyllenhaal changes his beard style and length from time to time. Most commonly however, he sports a full beard at a length of approximately 1 inch.

What Face Shape Does Jake Gyllenhaal Have 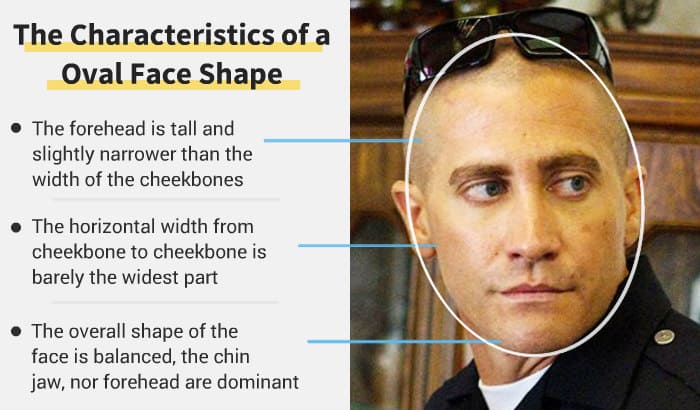 Jake Gyllenhaal has an oval shaped face. It has a marginally wider cheekbones compared to the width of the forehead and jawline, and the height of the face from the chin to hairline is typically 1.5 times the width.

The classic full beard is a perfect beard style for the oval shaped face, and it’s certainly not a coincidence that Jake chooses to grow his beard that way.

Almost all celebrities have their own professional stylists and barbers who make sure that their facial hair and haircuts match with their natural face shapes.

So most likely, at some point his stylist(s) have told him what kind of beard and hair styles he should go for; full beard being one of them.

Jake Gyllenhaal No Beard vs. Beard

In many cases growing a beard can make men look several years older, but in the case of Jake Gyllenhaal, the beard actually makes him look about the same age but at the same time he looks much more experienced and manly.

Since he has been voted to be among hottest guys in Hollywood multiple times – and he sported a beard during those times – one could make the claim that the full beard makes him look more attractive as well.

Here’s Gyllenhaal sporting a very short light stubble (close to a 5’o clock shadow). It’s hard to call this a “beard style”, but its actually officially known as the shortest facial hair style there is with just a 0.4mm length.

The medium length stubble, aka. designer stubble has a length of 1-3mm and can be grown in three days. As you can see, it suits Jake Gyllenhaal very nicely thanks to his thick beard coverage.

A step up length-wise from the short boxed beard, this short full beard style has natural cheekline and minimally groomed neckline.

This example above is the real “Jake Gyllenhaal beard”. The style he most commonly sports, and the style we will teach you how to grow and maintain below.

Gyllenhaal sometimes lets his beard get scraggly, especially around the neckline and the cheeks. It’s not a bad look, but also not the best one for suit and tie events.

How to Get Jake Gyllenhaal’s Beard

To get a beard like Jake Gyllenhaal, you need to first grow your beard out for approximately two months to have enough length – and obviously – you need to have thick enough beard with good coverage for it to look like that.

Then the next step is just to trim and maintain the full beard that you grew, which should be roughly one inch in length by now.

Here’s how to trim a beard like Jake Gyllenhaal:

Maintaining a full beard like this is not hard at all, considering that there aren’t many defined edges would constantly need to be trimmed down and reshaped.

Here’s all it takes to maintain a beard like Jake Gyllenhaal:

Jake Gyllenhaal is known as one of the hottest guys in Hollywood, and he certainly has one of the best beard games as well.

In fact, we previously ranked him as #1 in our list of best bearded actors.

While growing a beard like Jake Gyllenhaal isn’t too difficult (basically just wait for two months and then minimally groom your beard), the hard part is having thick enough coverage around your face, and just the fact that well, you ain’t Jake Gyllenhaal to begin with.

So while you might be able to pull off his beard style, that’s not going to bring about similar levels of attention with it.