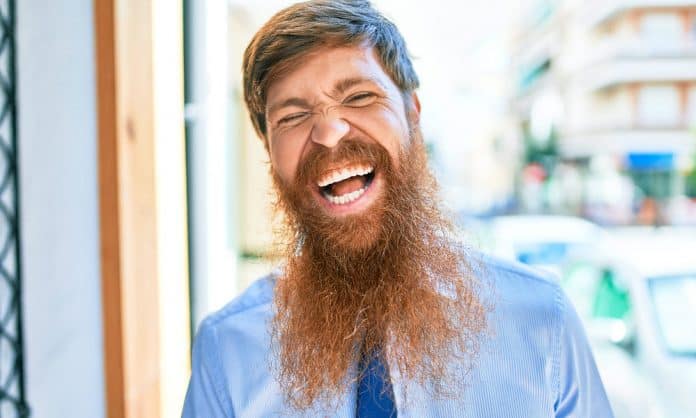 So you have a decent beard coverage on your face, but the facial hair spewing out of the follicles comes out thin and wispy.

Why does this happen, and what can you do to fix it?

Well, it’s a combination of things that cause wispy facial hair, with your genetics and testosterone levels playing the biggest role.

And while you might think that it’s impossible to fix a thin beard naturally, you are wrong, as it is certainly possible when you give it enough time and try out some of the out-of-the-box ideas we’re about to present below.

Are you ready to turn your feather-like weak beard into a real dense bush? Then do keep reading, you’re in for a treat.

Contents show
Why Some Beards Grow Thin and Wispy
Can’t I Just Grow Out a Thin Beard to Make it Look Better?
Can You Really Add Volume to a Thin Beard?
How to Fix a Wispy Beard
1. Use Beard Fillers
2. Stick to a Shorter Beard Style
3. Mix Beard Oil with Castor & Peppermint Oils
4. Start Using a Beard Roller
5. Consider Trying Minoxidil on the Beard
6. Beard Transplants are an Option
7. Make Sure to Get Enough Beard Nutrients
Conclusion

Why Some Beards Grow Thin and Wispy

Just like the hair on your head can grow out thin and wispy, so can your beard.

Simply put, when your beard grows frail, the facial hair follicles that sprout out the beard hairs are small and typically receive insufficient nutrients and blood flow.

Scientists have also found out that the male hormone testosterone plays a key role in the thickness of the facial hair, as it primes the follicles for growth and matures them so that the hairs convert from thin vellus hairs into thick terminal facial hair.

So if your testosterone levels are on the lower end, then it’s likely that the beard you can grow, grows out wispy. At the same time, other factors like your genetics, nutrition, lifestyle, etc. can also contribute to your facial hair growing out feathery and weak.

Can’t I Just Grow Out a Thin Beard to Make it Look Better? 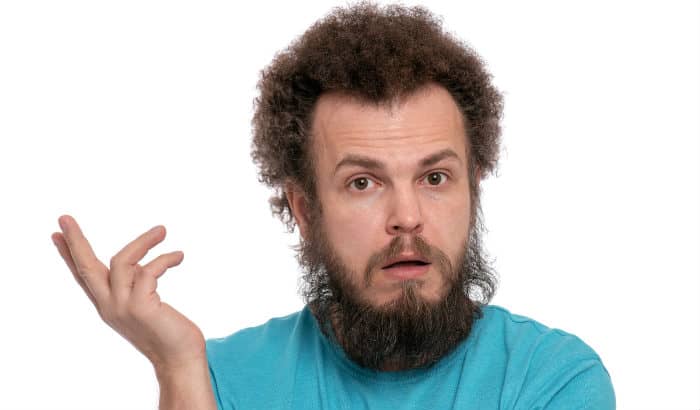 Many guys who have wispy beards, think that they could just grow it out long, and that eventually this would make it appear denser.

But in reality, growing out a wispy beard tends to result in a beard that looks like fine scalp hair. You know, facial hair that doesn’t quite look like a normal beard should.

You may have seen beards like this yourself, they’re the kind that are long, but which still have the skin underneath showing through.

Some even go as far as to calling them “pube beards“, and that’s a term no man wants to hear about their facial hair.

So no, you really should not try and grow out your thin beard in hopes of filling it out, that rarely – if ever – works out in your favor.

Can You Really Add Volume to a Thin Beard? 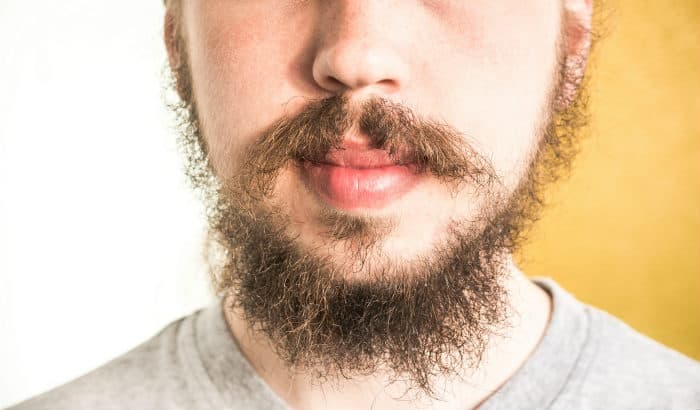 The question is; can you actually add volume to a wispy beard?

The answer is yes, but it does require a lot of patience, and few out-of-the-box ideas.

There are many purely cosmetic ways to make your thin beard look denser, such as using beard fillers, using thick beard oil, sporting a shorter beard style, and even dyeing the beard.

Of course, there are also some lesser-known ways to make your beard less wispy through making the follicles spew out larger hairs. These include things like using a beard roller, minoxidil, peppermint oil, making sure you get all the key beard nutrients, and even beard transplants (if all else fails).

Let’s take a closer look at all of these methods to see which are actually worth it.

How to Fix a Wispy Beard 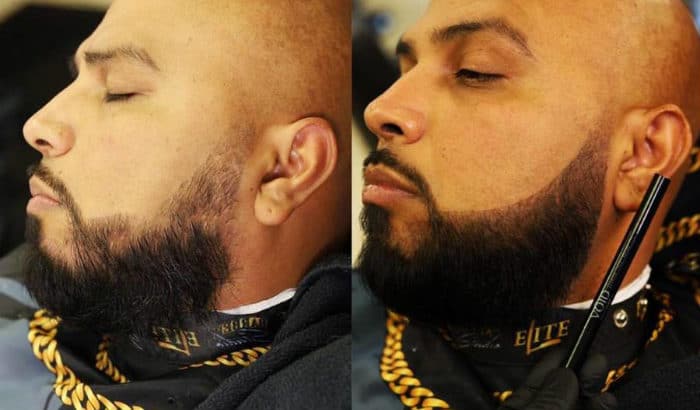 Beard fillers are a great instant way to add some mass and volume to a thin beard.

There are few different types of beard fillers, and they work well on different lengths of beard.

Like said, using beard fillers is only a temporary fix to a wispy beard, but as a quick and effective cosmetic enhancement, it can be worth it, especially before a night out, photoshoot, etc. You can read more in our bigger guide to the best beard fillers.

2. Stick to a Shorter Beard Style 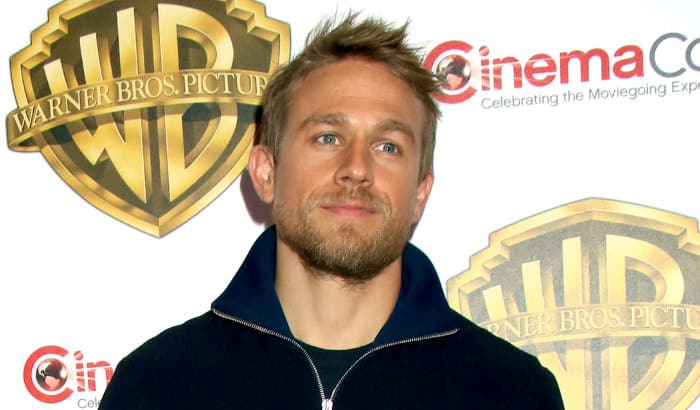 Yes yes, I know, this is somewhat boring advice especially if you’re wanting to grow out a long beard and it just turns out thin and weak…

But hear me out:

sometimes sticking to a shorter beard style is just a better decision, at least until you can make your beard grow thicker naturally.

If you take a look at Charlie Hunnam’s beard above, he tends to keep it quite short. The reason is simple, he has a thin and patchy beard, and if he would grow it out really long, it would end up looking feathery with barely any volume.

But when he keeps his beard short like this, it actually looks really thick and strong.

If you have a weak beard, but with good coverage around your face, then sticking to a short beard style – maybe even a stubble beard – is your best option. 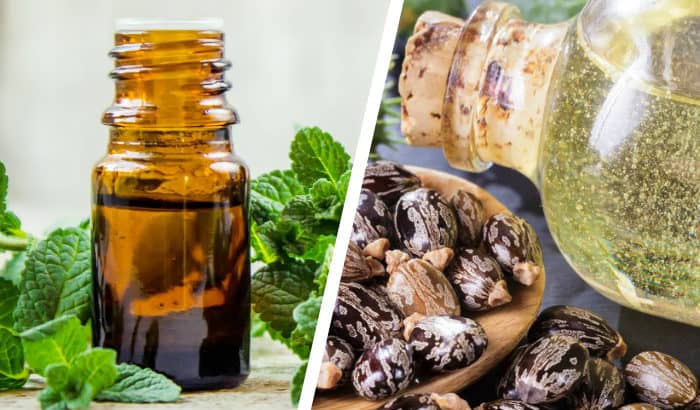 There are two oils that can work wonders in adding volume to your facial hair, and these are the peppermint essential oil and castor oil.

They have a different mechanism of action too.

NOTE: It’s important that you don’t add too much of the peppermint oil, as it’s extremely volatile and potent. Sticking to the 18 drops per 1 oz of carrier oil amount will ensure that you get roughly 3% dilution which is the same as used in the study that noted improved hair follicle diameter. 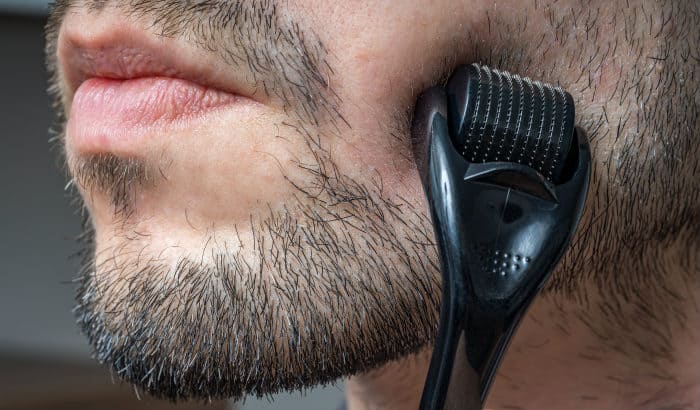 The beard roller is a handle with a roll on the end that has hundreds of tiny micro-needles in it.

The idea is to roll it around your skin, to puncture tiny micro-tears into the epidermis, which would then prompt the skin to repair itself by shuttling in blood filled with nutrients and collagen.

This method has been used succesfully on the scalp hair (in fact, it has been studied and found to be very effective as hair follicle stimulator), but only during the last few years has it became popular among beardsmen as a method of thickening the facial hair.

So if you want to add more volume to your light and thin beard, then using a beard roller with the needle size of 0.5 to 0.75mm needles 1-2 times per week is recommended.

I used to say that this is an “underground hack” for growing your beard, but it’s not that underground anymore.

About four years ago I wrote one of the first proper articles about using a Derma Roller to grow more facial hair, and since then the topic has just exploded in popularity with hundreds of brands producing their own “beard rollers”.

5. Consider Trying Minoxidil on the Beard

You might know minoxidil as the over-the-counter hair regrowth solution that bald men use and swear by, but far less people know that it works just as well on the facial hair.

There are studies which clearly show that minoxidil increases the size and diameter of the scalp hair follicles, and after long wait, there is now also research showing how it does the same to beard hair follicles as well.

Of course, there’s also thousands of anecdotal before-afters and reports about its effectiveness, so the scientific proof was just a cherry on top really.

But anyway, our topic is to fix a thin beard, and minoxidil can be very effective for this.

It typically takes several months before you can actually see the real effects, and you will need to stick to using something like the original 5% Rogaine or a generic brand like the 5% Kirkland Minoxidil in 1-2ml amount once or twice per day (which is tedious, I know), but the end result will be a less wispy beard.

Is minoxidil completely side effect free? No. Even though it’s OTC, it still has some potential side effects, and you should never use it without discussing with a doctor first.

Here are some links for further reading:

6. Beard Transplants are an Option 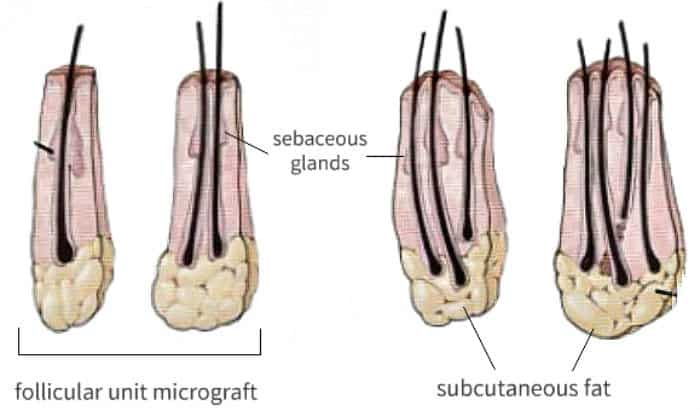 If all else fails and you still want to get a thicker beard through any means necessary, then one option is a beard transplant.

There are few different types of procedures and we discuss more about those in our larger guide to beard transplants, but to quickly explain it, you can basically choose either FUT (Follicular Unit Extraction) or FUE (Follicular Unit Transplantation) method.

In FUE the hair grafts are taken one by one from the donor area by a surgeon or with a motorized unit. In FUT, a small strip of tissue is taken from the donor location (usually back of the head) and the grafts are later removed from that and implanted into the beard.

The transplanted beard hairs are thick and definitely shouldn’t be wispy, but the problem is that beard implants are ridiculously expensive and it’s quite a big deal to go under the knife just for the sake of beard (especially when there are working alternatives we know of).

If you still want to do that, know that it’s a relatively safe option that will cost you anywhere from 3000 to 7000 dollars.

7. Make Sure to Get Enough Beard Nutrients 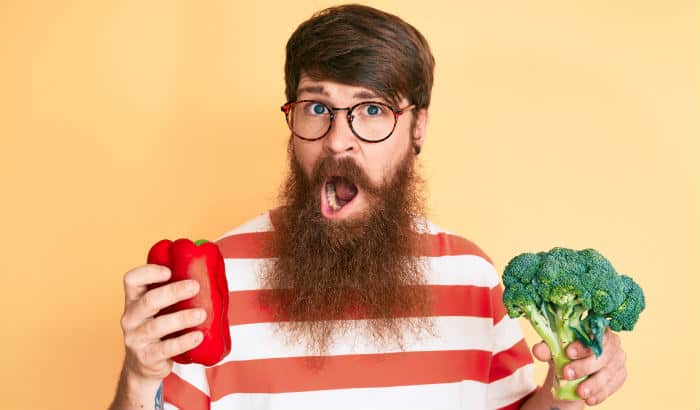 If your diet is insufficient in calories and nutrients, then your hair, nails, and beard will all start growing weaker and brittle.

Since the facial hair is androgenic hair (which means that the growth is stimulated by hormones) it’s one of the first ones to take a hit if your calorie and nutrient intake drops.

The simple explanation for that occurrence is that when food is scarce, the body will start to prioritize functions that are essential for survival, and at the same time it down regulates the ones not so necessary.

Facial hair growth obviously, is not that essential for survival, and it will slow down and get weaker if you fail to feed enough energy to your body.

You can make the matters worse by becoming deficient in the vitamins and minerals needed for beard growth, particularly vitamins D and E, and the minerals zinc, iodine, magnesium, selenium, and copper.

I’m not going to recommend any particular diet for beard growth, but for the sake of making your beard look less wispy, you should focus on getting enough calories, making sure you get all the necessary vitamins and minerals, and maybe take a look at this list of beard growth promoting foods while you’re at it.

If you want to make your thin beard look less wispy, then you have to attack the problem from multiple fronts.

And while you can’t change the state of your current beard (the one that has already grown out of the follicles), you can – over time – significantly increase the size and diameter of your hair follicles and boost the circulation to them, which will result in larger beard hairs and less of a thin beard.

Just remember that it will take time, growing a beard is a marathon, and changing its appearance will not happen over night. 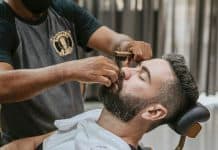