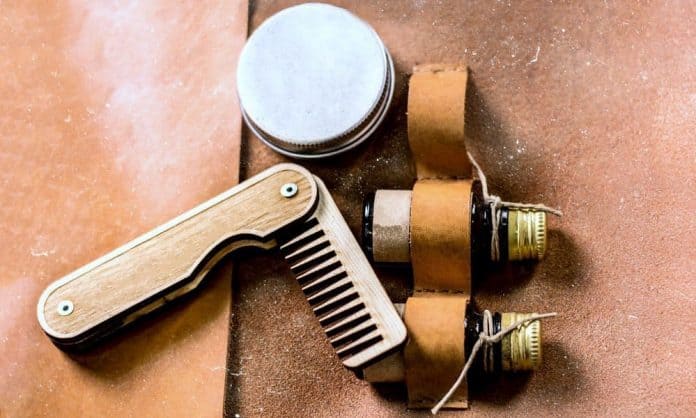 The most popular beard products ever made are the beard oil and the beard balm or balsam.

Beard oils are formulated to replenish the natural moisturizing oils of the skin underneath your beard. Beard balm on the other hand contains beeswax and helps create a protective barrier to the beard skin. Their consistency is also different, beard oil is light and runny, beard balm is thick and waxy.

(If you’re here just for a list of best beard oils or best beard balms, click those links as we have already ranked the greatest brands earlier).

But which one is better when you compare them head to head, and should you choose one over another or perhaps use them both?

This article will answer those burning questions, and also clearly explain to you the key benefits of beard oils as well as the benefits of using beard balm. 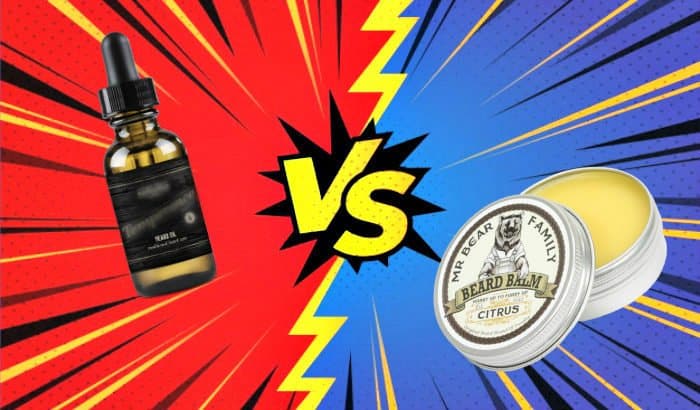 So what exactly makes beard oil different from beard balm?

Well, the consistency for starters. The balm contains some natural beeswax and is solid in room temperature. You need to scoop some out and heat in-between your fingers before you apply it.

Beard oil, will always remain in liquid form, simply because it has no beeswax in the formulation.

Other than the solid consistency, there are also small differences in the blends of carrier and essential oils.

Beard balms are often higher in topical fats like coconut oil and shea butter, which provide nourishment to the deep skin layers but have the downfall of also being so thick and heavy that they can block the pores.

Beard oil on the other hand usually has light and non-comedogenic oils in the formulation like jojoba oil, meadowfoam seed oil, almond oil, etc.

These have slightly worse hydrating benefits, but they do not clog the pores and absorb much better than balms do.

Bottom line: If you want something unnoticeable that softens the beard and prevents facial hair itchiness, get beard oil. And if you need something less unnoticeable that truly moisturizes and nourishes the skin – and helps to eliminate beard dandruff – consider using beard balm.

The purpose of beard oil is to help you replace the natural sebum oils that you lose when you shower and wash your face.

Since the sebaceous glands that produce the oils are finite in size, the longer your beard gets, the more beard oil you need to use.

If you fail to do this, and your beard grows long without using any beard oil at all, you will inevitably struggle with dry skin under the facial hair, brittle hairs, and itchiness.

However, if you use beard oil your beard will stay soft and well-moisturized.

Here’s a quick list of the key beard oil benefits:

Remember that you don’t really need beard oil until your beard reaches about 1.5″ to 2″ in length. Before that, the natural sebum oil produced by the sebaceous glands will be plenty enough.

The main purpose of beard balm is to protect and deep condition the facial hair.

It could be called the heavy-weight version of beard oil, and that would be pretty close.

Where beard balm really shines is when you have already let your beard go into a bad condition. It has gotten dry, brittle, and there are flakes of dandruff on it.

In those cases, beard oil may simply not be enough anymore, and you need some extra hydrating benefits. And that’s when you grab a beard balm.

Since there’s some beeswax in the formulation, many men also use beard balm to style, shape, and tame their beards. For that purpose, it’s much more useful than the liquidy beard oils.

In short, these are the key benefits of beard balm:

The only bad thing about beard balms is that it’s so heavy and thick that it can block the pores and look a bit greasy on the face.

Which One Should I Use? 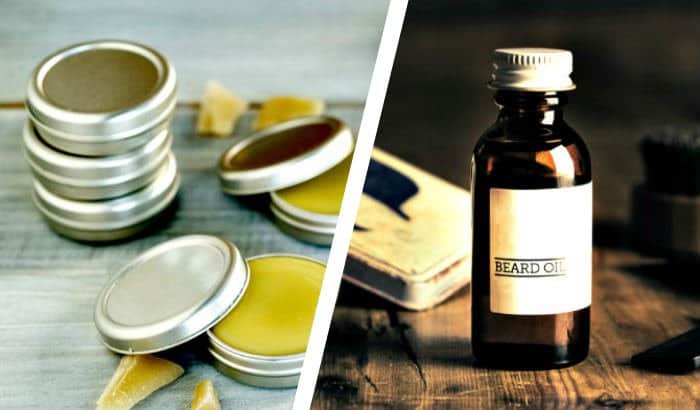 Since we are nerds about our own beard care routine here, of course, we are going to recommend that you use both the beard oil and the beard balm.

The reason being that they offer unique benefits which differ greatly from another – even though many see them as almost identical products.

If you insist on us choosing the better one, we would have to side with beard oil having a little bit more uses.

Let’s say you can only select beard oil or beard balm as your go-to beard care product, then you need to choose the product that better suits your needs…

Why after the shower? What’s the secret behind that?

Beard oil was originally formulated to replace the natural sebum oils that you lose when you wash your face.

Therefore it’s only natural to apply it immediately after the shower and as an added benefit this way you will be sealing some of the moisture from that shower into your facial hair fibers as well.

If you then follow up with the beard balm a few hours later, you can enhance the benefits of the oil as the beeswax in the balm will create an ultra-thin lipid layer on top of your beard which works as a protective barrier that further seals in the moisture.

As for what are the best oil and balm to do the job, we would recommend ZilberHaar’s N°1 Beard Oil and the Big Forest Beard Balm by OneDTQ.

Should you choose beard oil or beard balm?

We say you should get them both, and if that isn’t an option, maybe start from getting the beard oil and see if you need to upgrade to balms later on.

They both have their unique benefits, even though if you look at the ingredients, they are not too different from each other.

I guess you could sum it all up by saying that beard balm is just a heavy-duty beeswax-infused version of beard oil.