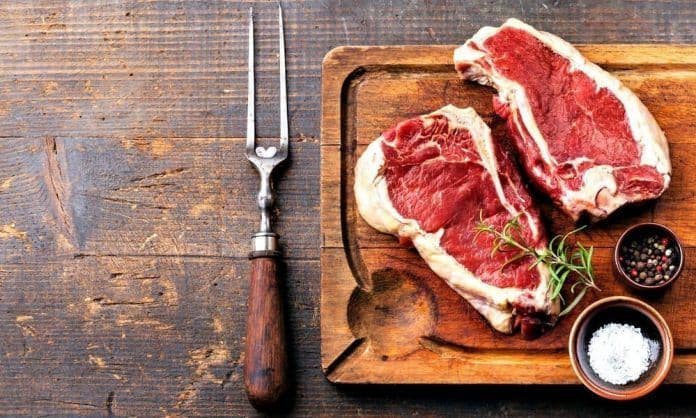 The truth is that there are many foods that promote beard growth. Some through impacting your hormone levels, others by providing vital beard nutrients to the follicles.

Since facial hair growth is almost completely regulated by male hormones (testosterone and DHT), eating foods that increase the levels of these two hormones and increase the bodily utilization of these androgens, is one of the best ways to grow a beard faster naturally.

But why are some foods better than others in boosting your beards growth rate?

Well, it has to do with things like nutrient density, what is the fatty-acid profile of it like (huge impact on beard hormones). and what kind of other beard nourishing compounds it has.

Simply put, some foods are great for beard growth, others not. And today we are going to look at the best ones. 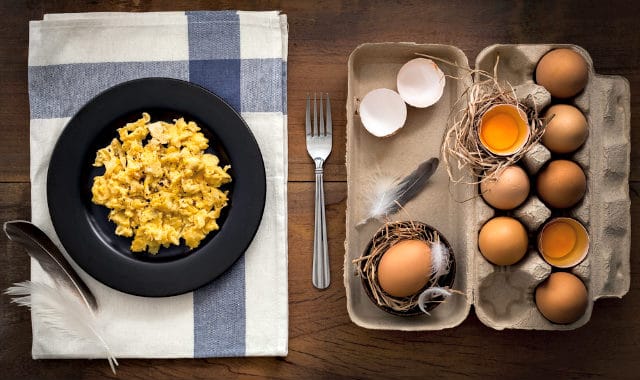 Eggs are very high in quality protein which is one of the essential building blocks of hair.

Eggs also contain cholesterol – which although demonized – is necessary for healthy testosterone production1, the hormone necessary for beard growth.

Biotin is really good for beard growth, and it just so happens that eggs are one of the richest sources of biotin.

Eggs also contain vitamin D, which is important for your testosterone production. + There’s evidence suggesting that it plays a role in the “maturation of the hair follicle” helping to convert thin vellus hairs in your beard into thicker terminal kind.

Last but not least, eggs are loaded with nearly all essential micronutrients (vitamins and minerals) and also have fairly good fatty-acid ratios for the production of testosterone and DHT (high in saturated and monounsaturated fats, low in polyunsaturated). 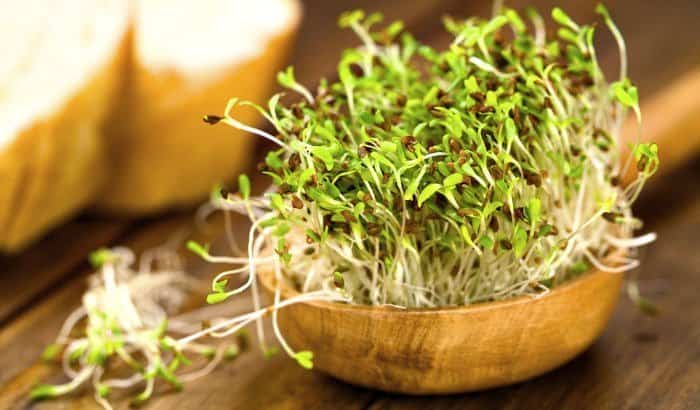 In this fascinating study researchers put 34 men into a diet that contained 50g of alfalfa sprouts per day, their DHT levels increased by 21% and free-testosterone by 14% in just 4-weeks.

As you know, testosterone stimulates facial hair follicles and primes them for growth, and DHT is responsible for increasing linear beard growth.

Or sprout, I’m not even sure about the terminology here. The bottom line is that eating more alfalfa sprouts can help your beard sprout better as well. 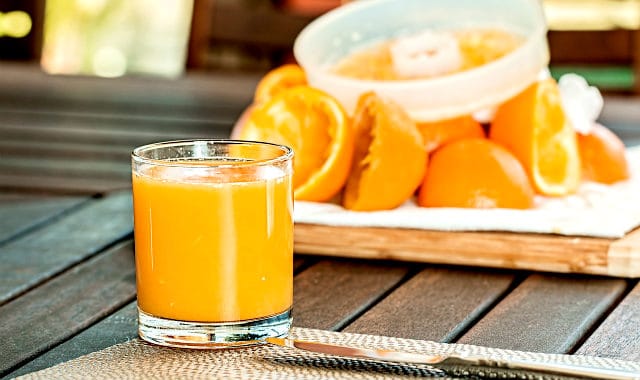 Oranges might not be the first thing that comes to mind when thinking about nutrition that promotes beard growth, but this doesn’t mean it wouldn’t work.

In fact, it’s probably one of the best fruits for beard growth there is.

The reason for OJ’s beard boosting ability is in the fruit sugar fructose.

And fructose – although demonized in the media – has been shown to lower the amounts of sex hormone binding globulin (SHBG), which is a hormone that binds testosterone and DHT, making them less active in the body2.

When you drink orange juice the naturally occurring fructose in oranges will lower SHBG release from the liver, and thus leave more free-testosterone and free-DHT into the bloodstream to attach to hair follicles and make them grow thicker and stronger.

Not only is OJ beneficial for male hormones, but it also increases thyroid activity, which can speed up beard, nail, and hair growth.

Not to mention the naturally occurring vitamin C that is necessary micronutrient for facial hair growth. 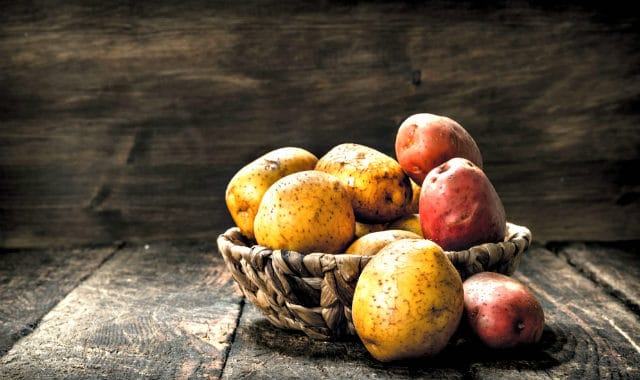 Potatoes are a clean and gluten-free source of quality carbohydrates.

And carbohydrates are what your body needs in good amounts to produce testosterone and DHT (the main hormones behind facial hair growth).

One study showed that when people eat twice as many calories from carbs than from protein (a protein to carb ratio of 1:2), their testosterone and DHT levels shoot up3.

And we all know by now how important androgens are for your beard nutrition.

Needless to say; if you have a patchy beard, you need to incorporate some potatoes into your diet. 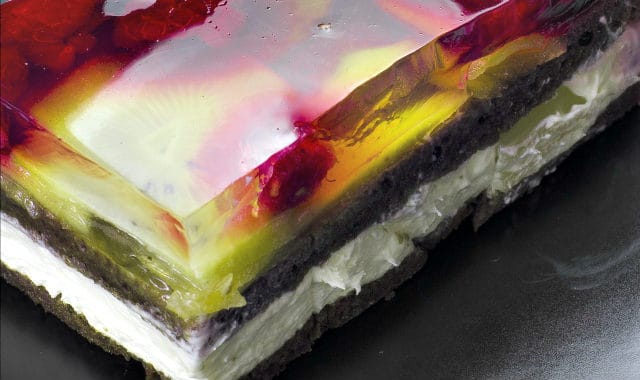 Our ancestors always ate the full animal when they hunted. This gave them the muscle-meat, the connective tissue protein, and the internal organ nutrients.

Fast forward to today, and we only consume the muscle meat. This gives us an unbalanced intake of amino acids (protein building blocks).

We get too little of two of the main amino acids for hair and beard growth, which are; glycine and proline.

These are the actual collagen proteins that your body uses to produce hair, skin, and nails. And the fact that we lack them in our diets slows down our natural beard growth abilities.

You could go as far as saying that glycine and proline are some of the most important, yet almost completely forgotten nutrients for beard growth.

I get that it’s not that enjoyable to start eating animal organs and bone cartilage, but let me tell you that there’s also an easier way to get more glycine and proline: Just consume some gelatin.

Nearly half of the amino acids in gelatin are collagen proteins, and thus this food promotes facial hair growth. 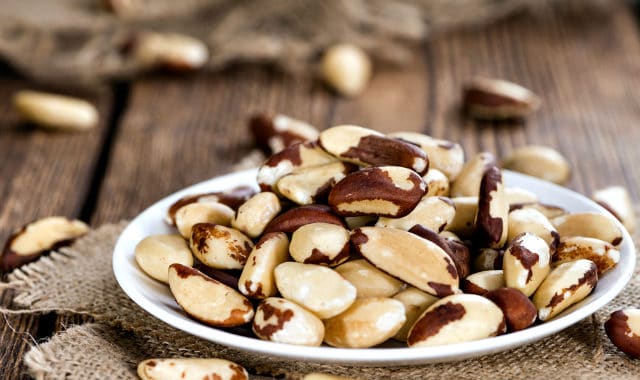 Brazil nuts are one of the best natural snacks that help grow facial hair.

This is because of the very high amount of the mineral selenium in them.

Meaning that as little as 2 of these bad-boys per day can finally help you fix that sparse beard naturally (albeit not alone), as selenium increases testosterone, is necessary mineral for beard growth, and speeds up thyroid function.

Always get organic Brazil nuts with the skin intact, as nearly all of the selenium is in the skin of the nut. 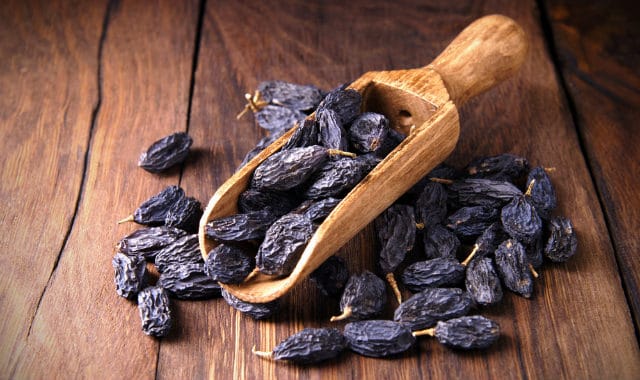 Raisins might be the big secret for growing a thicker beard naturally. Seriously.

This is because they’re among the highest natural sources of boron, a trace mineral great for beard growth, that not many men know about.

And boron, it increases DHT levels and free-testosterone.

One study showed a nice 28% increase in testosterone4 and 10% boost in DHT with only 10mg’s of boron per day. And another one saw similar results with slightly lower boron dosage5.

Good thing is that 100 grams of raisins contain 3mg’s of boron, making them one of the best and not so well-known beard growth-promoting foods.

If you’re not a fan of raisins, you can also supplement with boron to get the same effect. 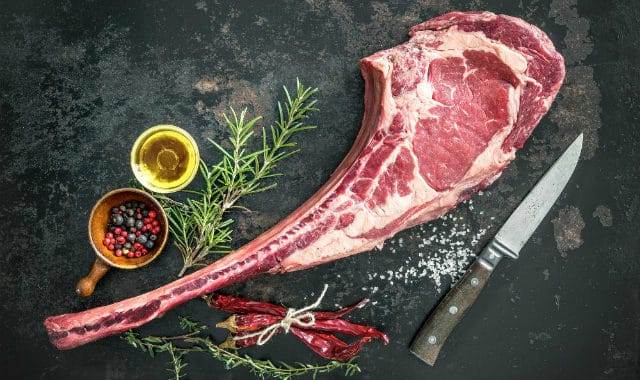 Red meat, for example, is a great source of saturated fat, the main fatty-acid needed for testosterone synthesis.

When eating muscle-meats, remember to add in gelatin buff up the amino-acid profile. 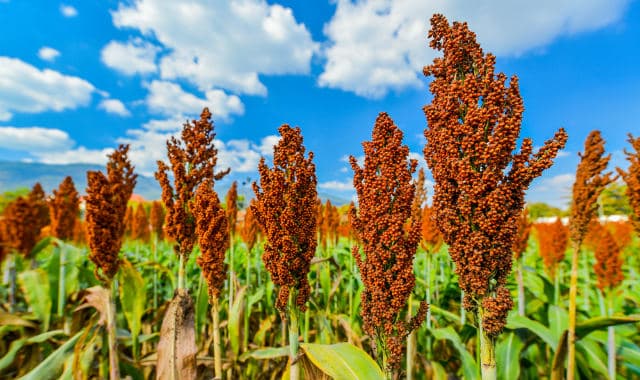 Sorghum is a relatively unknown gluten-free grain that comes from Africa.

It’s also one of the unknown foods that help promote beard growth.

How do you ask? Simple, sorghum has been scientifically proven to increase the levels of 5-a reductase enzyme by 54%6.

And 5-a enzyme converts testosterone into DHT, the more potent beard-growing hormone.

If you’re not a fan of the taste, there are also some beard supplements that use sorghum extract. 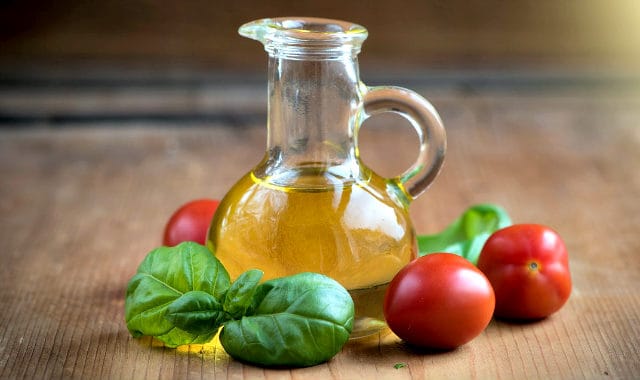 Olive oil is something that all men should incorporate into their diets. You could even apply olive oil to the beard as beard oil.

Its fatty-acid ratios are pretty darn good for testosterone and DHT production:

And while we’re at it, there’s actually scientific evidence that consuming more olive oil will lead to higher testosterone levels.

In a Moroccan study7, young men were told to switch their main fat source to olive oil and consume it for 2-weeks. Blood was drawn before and after to see how their hormones would react.

The result? Their testosterone levels increased by a whopping 17%. This if anything will stimulate new growth of facial hair over time.

Olive oil is also a great source of antioxidants, it contains the testosterone boosting glycoside compound; oleuropein8, and it has been studied a lot for its anti-inflammatory effects. 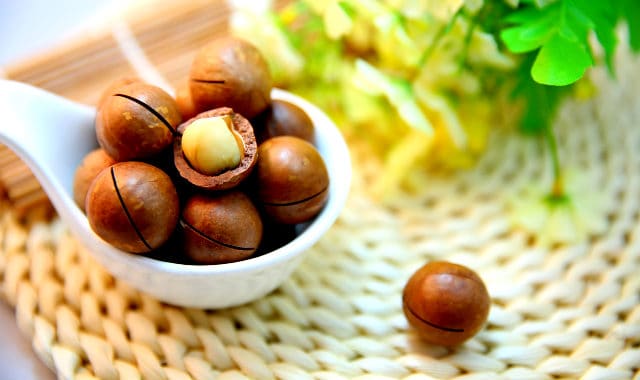 Sadly, too many nuts have high polyunsaturated fat content;

Which if you look at the studies, can suppress testosterone and DHT production, and thus suppress your ability to naturally grow a beard.

Macadamia nuts, however, can be easily labeled as beard foods, since they contain only 2% of the fatty-acids from PUFAs, while nearly all of the rest are the testosterone supporting MUFAs and saturated fats.

You can easily grab a bag of dry roasted salted Macadamia’s from Amazon and add them into trail mixes or use as snacks whenever you crave chips or some other high PUFA junk. 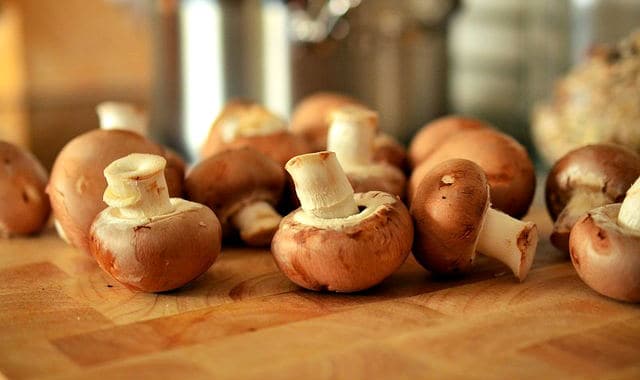 This is critical because aromatase works by converting testosterone molecules into the female hormone; estrogen. The more aromatase you produce, the less testosterone your body can maintain.

In other words; aromatase enzyme converts your hard-earned androgenic male hormones, into feminizing hormones, and as you might expect, this is no Bueno for facial hair.

Loaded with polysaccharides, white button mushrooms have been found in multiple studies9–11 to reduce estrogen production by suppressing the production of aromatase enzyme. 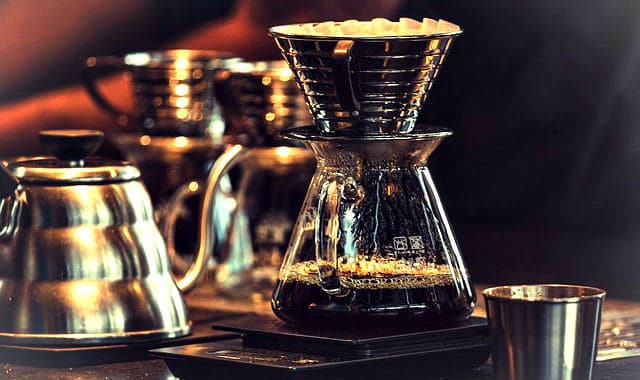 According to science, coffee can improve your workouts12, and raise your testosterone levels. The latter, which is great news for facial hair.

It has been shown that coffee and/or caffeine supplements act as selective PDE-4 enzyme inhibitors, which increases a hormonal secondary messenger called cAMP13.

Little do most people know, coffee is also a major source of beneficial antioxidants and a good source of magnesium. In fact, according to Healthline, coffee is one of the biggest sources of antioxidants in the Western Diet.

Since light and medium roast coffees offer more antioxidants and caffeine per cup, they would be my recommendation for beard growth stimulation. However, darker roasts work well too, so if that’s your thing, go for it. 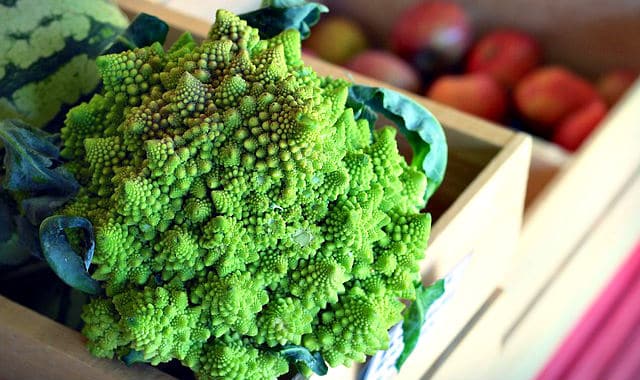 Last but definitely not least, let’s look at cruciferous veggies.

Not only are these rich sources of multiple minerals and vitamins needed for facial hair growth, but they also have an interesting hormonal effect.

You see, most cruciferous vegetables contain a compound called Indole-3-Carbinol (IC3), which helps the body to get rid of excess estrogen15, and also blocks the enzyme aromatase16, which is an enzyme that converts testosterone (the male hormone) directly into estrogen (the female hormone).

By consuming more cruciferous vegetables, you can block some of this conversion, and leave more beard growth-promoting testosterone into your body, while also enhancing the excretion of the feminizing estrogens.

These are some of the IC3-rich beard growth foods:

Beard growth foods are simply foods that increase testosterone or DHT levels and/or make the hormones more active in the body by lowering SHBG.

Other than that, certain foods which stimulate thyroid hormone production and contain high levels of beard growth vitamins and minerals can also speed up the natural beard growth rate.