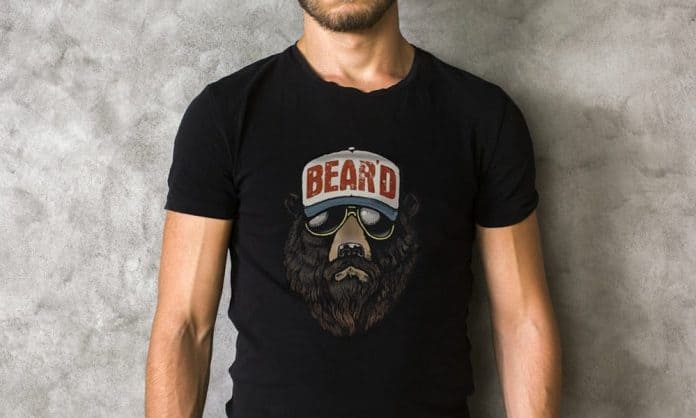 Looking for some funny beard shirts? You have landed on the right article my friend.

We have got you covered.

We searched the depths of the internet to deliver you a cutting-edge list of beard-related t-shirts, hoodies, and sweatshirts. Then curated the massive list down to just 6 of the best.

We chose to omit all those super-tacky and egoistic text shirts that go like “Oh so your man doesn’t grow a beard? Tell her to man up” etc.

Not only because they usually look boring design-wise, but also because everyone except the dude wearing such shirts thinks they’re untasteful and tacky.

Remember to keep it classy my fellow beardsmen. Just because you can grow a beard, doesn’t mean you should rub it in other peoples faces.

This ultra-soft 100% cotton shirt not only feels nice.

It looks that way too.

The masculine design is a perfect match for any bearded man.

Pair this beard T-shirt with a nice pair of jeans and some boots and you’re golden. Just like that.

This brand is Veteran owned and proudly American. So if that’s your cup of tea, then even better for you.

After looking at the reviews and questions on Amazon, it looks like a lot of people are not sure if they can wear a shirt like this if they’re not veterans or in the military.

Although I’m not American, I hold a rank of a Sergeant in the Finnish military and I didn’t even think anyone would expect someone wearing a shirt like that to have to be in the service.

Maybe it’s because of the flag or the crossed guns?

Maybe they have some other more military-ish designs that make people think that.

Anyway, I see why any non-military patriotic people with beards couldn’t rock this shirt without any worries. Heck, I own this shirt and I live in the Scandinavia.

The beard scale hoodie is something else.

It’s nothing special, in terms of material. A classic soft well-fitting black hoodie.

(There’s also a T-shirt option with the same print).

The front has this cool beard scale:

What an amazing idea, and no wonder they’re selling like crazy.

Maybe you can get two and gift one to your bearded friend, then make a bet on who can reach the godly status first

This has got to be one of the coolest facial hair products I’ve seen.

This is the polar opposite of those tacky:

there’s a name for people without beards; – Women

T-shirts you can find on the corniest egoistic hirsute boys.

Now that I think about it, I may have an unhealthy relationship with bear-related products.

The other day I caught myself drinking bear beer, with a bear beard shirt on, while I had Mr. Bear Family’s beard oil on my mane.

Anyway, the shirt is good quality 100% pre-shrunk cotton and printed in the USA.

It also has really nice customer reviews and the shirt seems to fit as expected to most people.

This is another pretty cool “fear the beard” style T-shirt.

It’s nice and subtle in design without going overboard with flashy and obnoxious buzz.

The brand is made in the US, semi-fitted 100% ring spun cotton.

In other words, it should feel comfortable and fit most builds quite nicely.

There’s something about beard clothing that makes me think why every brand is using skulls, obnoxious slogans about dropping panties, and bears in their design.

And as you can see, this too has a skull, however; it’s a pretty subtle and good looking one.

I’m so terribly sorry, but I have to continue with the bear stuff.

This logo just looks too cool, and the other slogan shirts on the market kinda look too bad to list on here.

This is a shirt from a well-known respected clothing brand called TeeStars, and as you can see by clicking through the image, they have this shirt in a variety of colors.

The bear logo is also an original authorized design, not an unauthorized “replica” of someone else’s work like most of the beard shirts you can find online.

And hey, most importantly; it looks great. And that’s what we are all about with this list.

So where does the “Fear the Beard” craze come from?

Most people would agree that it was the hype surrounding Brian Wilson’s bushy beard when he was the closer for the San Francisco Giants.

There are lots of athletes that are now linked to the Fear the Beard slogan, some have even songs made about their beards.

Perhaps the coolest thing – however – is that Brian Wilson reportedly turned down an offer of $1-million from 800Razors to cut it.

Sadly, most of the market is filled with poorly-designed text shirts with obnoxious egoistic slogans that make you look like the biggest douche in the universe.

Which is why we curated this list of six awesome beard T-shirts, long sleeves, and hoodies. We hope it helps you find what you’re looking for.